Lately we have had lots of police helicopters passing overhead.  You may even remember me writing about this before here on our blog.  Seeing police helicopters have become a part of our reality of living in a slum in Brazil.
Seems strange doesn't it?

The other day, as I heard another helicopter passing over our home, I thought to myself, "There's a helicopter again."  Then I began to pray for many things - for peace, safety and for God to move in whatever situation was going on at that moment.
Then I was suddenly struck with the fact that this has become "my normal."

To hear the whirring sound of a helicopter is normal for me, and when I hear this sound I also know that something is going on in this slum - a place I love very much. 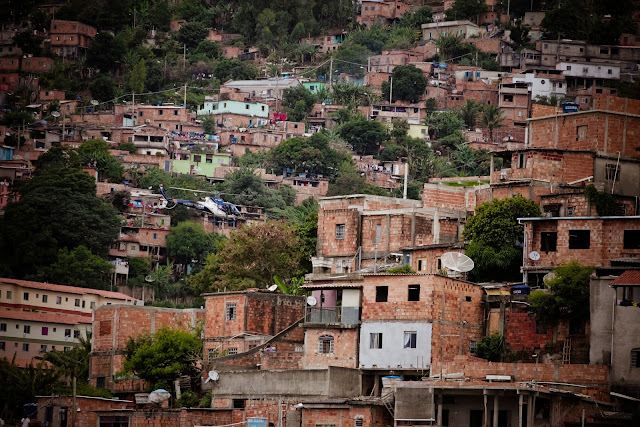 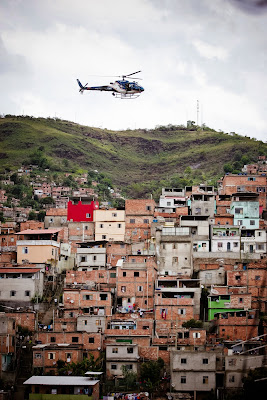 We live in the largest slum in Belo Horizonte and it is made up of lots of little "vilas" or villages all connected together.  We live in Vila Cafezal which is located at the bottom of the mountain side and the beginning of the slum.  It is a safer area of the slum, as the more dangerous areas are more towards the top of the mountain.

Here is a short video clip of one of the helicopters hovering over the slum.

Recently there has been lots going on here in the slum.  Thankfully things are calmer now, but just earlier this week two buses were burnt to the ground by people in the slum who were rioting against the police.
(This has happened another time back in 2011 and I wrote about it here and here.) 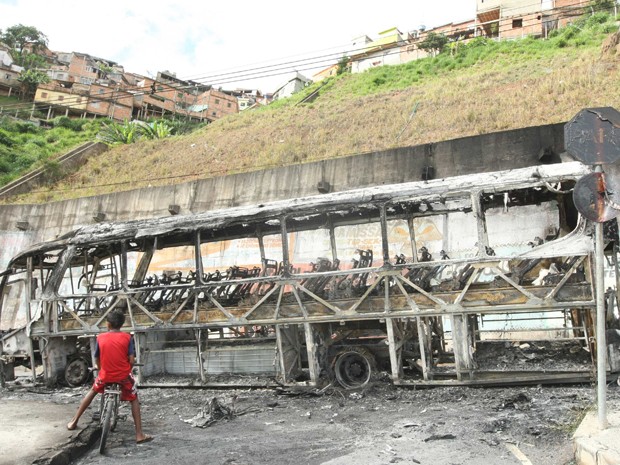 All this conflict happened in the more dangerous area of the slum, which is about a 10 to 15 minute walk from our house.  We actually held our Photo Exhibition up near this part of the slum last Sunday.
.
Sometimes there is conflict closer to home... A few weekends ago the police were searching for someone in the vila right next door to us.  The word on the street was that it was some kind of operation against the drug gangs.  It was so close to the Lighthouse and was a bit scary.

My Dutch friend (and fellow missionary) named Joyce asked me, "Laura, are you scared?"  At first I thought, "No, actually this is normal for us,"  but then about 15 minutes later the helicopters were almost literally on top of us and our area.  You could even see the police inside the helicopters with their huge machine guns pointing downwards.  If you look closely you can even see it in this photo... Scary! 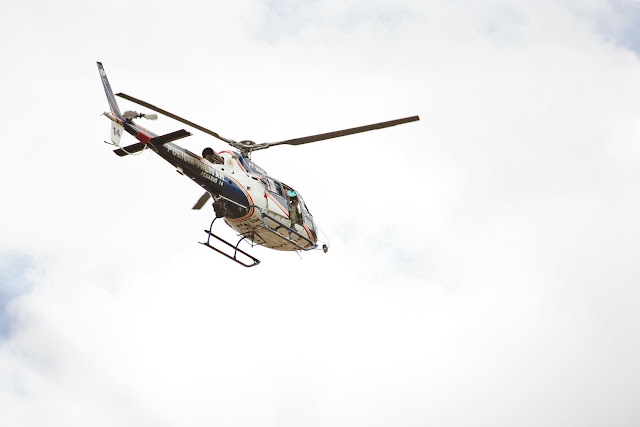 When I saw these police with their big guns I did begin to feel a little scared.  I wanted my family inside my house safe and sound,  but of course my daring husband wanted to take photos of all the action.  So here you can see some of the photos Felipe took on this specific day.  I encouraged him to be careful, (which he was) and he also was using his zoom lens to capture these images (from far away). 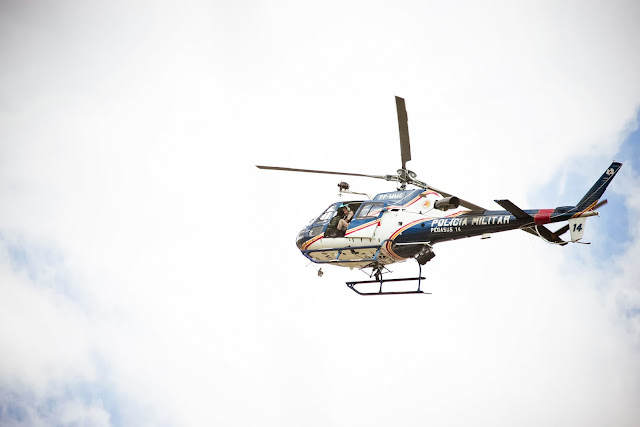 During this afternoon I really observed the atmosphere in the slum.  The streets were empty, as many people retreated to their homes, some standing on rooftops or porches to watch the police and to see what would happen. 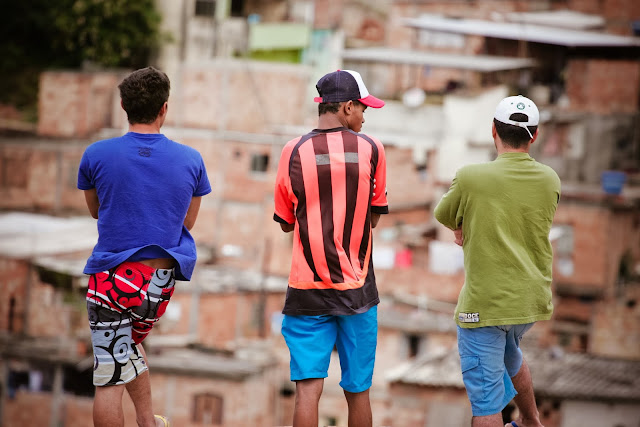 Normally people sit outside on the curbside and hang out in the streets, but on this afternoon the streets were empty.  There were not even cars driving in the streets, and our neighbors who usually play loud blaring music turned their music off for a change.  On this specific day there was an eerie silence and a stillness in our section of the slum... All you could hear was the loud whirring sound of the helicopters flying overhead.
When the police operation was complete, suddenly life returned.

I began to think more about the children who live here on this day...
How do they feel when the helicopters are so close?
Do they feel safe?
Are their parents helping to comfort and explain the situation to them in a healthy way? 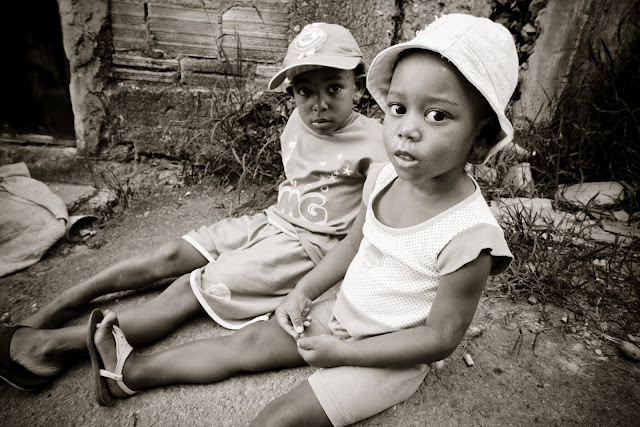 This is the reality the children living here in the slum are growing up in, and now also the reality my children are facing...  We will point our girls and all the children we work with to the Lord in the midst of the conflict. 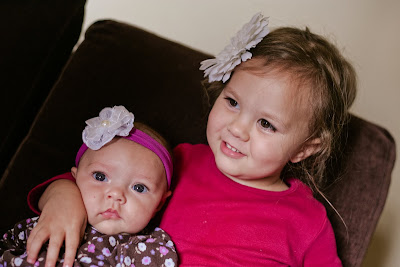 We rest in this promise from the Word of God,
God is our refuge and strength, an ever-present help in trouble.
Therefore we will not fear...
~ Psalm 46:1-2a ~

As I have written before,
"The safest place to be in the world
is in the center of the will of God." 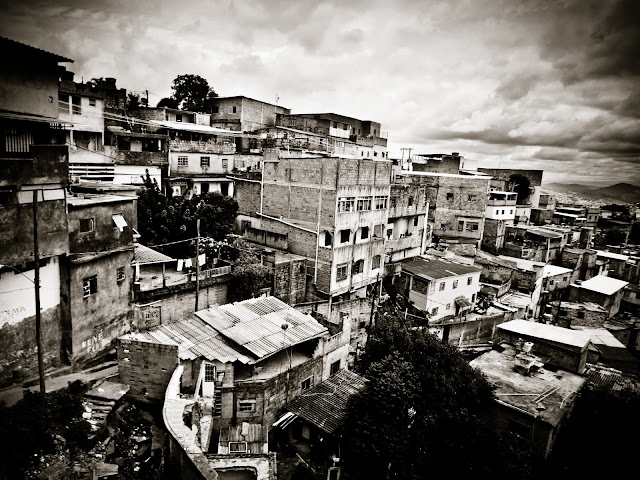 We know He has called us here and will use our lives for His purposes, His glory and His kingdom!
The Lord Almighty is with us;
the God of Jacob is our fortress.
~ Psalm 46:11 ~
Posted by Let Them Come at 10:22 AM